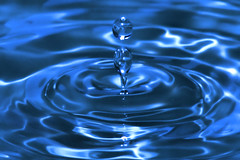 “Tea and the sort of coffee you get in Britain are fine for rehydrating - the diuretic effects of caffeine are massively outweighed by the fluids in those drinks. There are millions of people who get most of their fluids from tea without any ill effects.” - Ursula Arens, a spokesman for the British Dietetic Association

If you want to be notified the next time I write something, sign up for email alerts or subscribe to my RSS feed so you don't miss out on real, muscle building & fat burning tips from Marc David! Thanks for reading.