Coffee Checklist: Are You Consuming Too Much?

I’ve got a confession to make! I’m a coffee-holic. Ever since I bought myself a Keurig single cup brewer, I’ve been drinking more coffee than ever before. I love the machine but it may be the death of me.

I’m sure by now you are well aware the benefits of moderate caffeine consumption. What you may not be aware of is potential problems with consuming too much caffeine.

As a quick reminder, here’s the average breakdown of some typical beverages that contain caffeine.

Moderate being defined as 200-300 mg of caffeine per day. For drip coffee, that might be 1 to 2 cups a day but for a K-cup lover like myself, it changes the scope of my habit. For those who make trips to Starbucks or Peet’s, the playing field is isn’t the same as instant coffee your parents drank in 1970. This is true for the wide range of sugary caffeinated beverages in existence today that simply did not exist a decade ago.

In my college days, I could suck down 3 cups of Folgers ground coffee without a problem and still be under 400 mg a day. The source of the caffeine came from cheaper, less potent, store brands. Of course, the taste wasn’t all that good but the caffeine levels overall were much lower.

Here’s just a few of the higher caffeine beverages on the market that will take you to the upper levels of moderate into heavy consumption with just ONE serving.

** There may be other additives in these drinks including sugar (topic for another post ) but the primary focus is on caffeine consumption. **

While moderate caffeine consumption probably won’t cause harm for most of the population unless you are extremely sensitive to caffeine, too much can noticeably affect your health. Heavy daily caffeine use — more than 500 to 600 mg a day, or about four to seven cups of coffee — can cause:

Worried that you might be a heavy user of caffeine or going beyond the 600 mg per day?

If you want to change your caffeine habits, you can try some or all of the following suggestions:

Caffeine offers many health benefits in moderate amounts between 200 – 300 mg per day. But, when you reach 600 mg a day, you’ve hit the upper limits of Heavy consumption. At this point, it would be wise to take some of the recommendations above to limit your usage. As with most supplements, some is good, more is not better.

Coffee: Is it healthier than you think?

A group of researchers at the University of Guelph, have conduced a study that reached a rather interesting

Of course, the end result was that more research was needed to make any certain conclusions that caffeinated coffee could be a risk factor for insulin resistance.

The study did not list out what meets the criteria for a Western breakfast cereal. I think I’m pretty say with my daily raw oats and I don’t drink coffee before eating. I’ll have it with breakfast sometimes but more often than not, I drink my coffee about 60 minutes after my healthy breakfast.

Photo of the Venti Mocha by betsyjean79. Used under a Creative Commons license.

Here’s some interesting nutrition facts for coffee that may be of interest to you. Especially those on a health 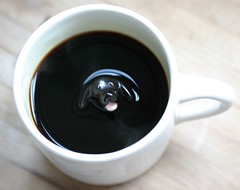 quest which includes the bodybuilder looking to build muscle.

Most people think of coffee as the beverage to get your caffeine addition taken care of for the day. Worldwide numbers run as high at 85% of all caffeine consumed comes from coffee. This figure alone makes the #1 reason people drink coffee is for stimulation.

The actual caffeine content can vary greatly depending on the beans and method of brewing used. But here’s a quick breakdown of the average caffeine in coffee. If you need more nutrition facts for coffee on a particular brand or coffee house creation, it’s best to check out that vendor’s website. Adding in sugars and additional shots can change your standard cup of joe into something entirely different.

Possible Benefits of Drinking Coffee (in no particular order):

1. Sleep pattern changes
2. Increased anxiety
3. Staining of the teeth (my dentist always bugs me about this one.)
4. Effects on pregnancy and menopause
5. Cholesterol (French Press method can use trap cafestol and kahweol which may raise LDL levels that paper filters capture)

Overall, coffee offers many benefits and very little side effects to the average consumer of this beverage. You’ll reap more rewards by drinking it in moderation. That’s 1-2 cups per day. Over consumption of caffeine does have its drawbacks.

Plenty of health benefits are brewing in America’s beloved beverage

Photo of the coffee by Thomas Hawk. Used under a Creative Commons license.