The Great Vibram FiveFingers Hoax: Justice for a Price? 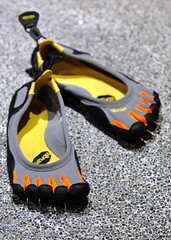 Have you wondered if barefoot running was more beneficial than running in traditional footwear?  The photo above is of Vibram’s FiveFinger minimalist running shoes.  They claims to offer up all the benefits of barefoot running but with protection and some support.

Barefoot running became a craze and Vibram quickly jumped on it with their minimalist running shoes.

Apparently Valerie Bezdek doesn’t think so as she’s the primary plaintiff in a class action lawsuit in the District of Massachusetts for “deceptive” marketing in the tune of $5,000,000 against Vibram FiveFingers.

The barefoot running craze started much like any other fitness craze.  It great in popularity and soon, companies were marketing products that catered to a certain niche.

“While anecdotal evidence and testimonials proliferate on the Internet and in the media about the possible health benefits of barefoot running, research has not yet adequately shed light on the immediate and long term effects of this practice..” ~ American Podiatric Medical Association

But it gets interesting… there’s many experts who testify that running in traditional running shoes is a heel-strike manner.  It could take some time, upwards of a year to transition to the different style of running.  According to one ACE Study, if you fail to change over to a more forefoot stride while wearing Vibrams, you may open yourself up to discomfort and possible injury.

Vibrams admits it’s not unusual to experience some pain when using the minimalist style shoes and that is addressed on their website.

What the Plaintiffs Claim:

The lawsuit goes on about various experts who don’t buy into the belief that running barefoot is beneficial and could cause issues.  The Plaintiffs introduce other sources that show the transition period can be lengthy and fraught with discomfort.  They state the shoes are deceptive, overpriced and none of the benefits listed can be backed up by valid scientific peer reviewed research.

This isn’t entirely new.  Companies have been sued for years for deceptive advertising.  Reebok paid $25 million for it’s deceptive shoes.

Why Vibram posted such claims without any valid evidence in this day and age it’s irresponsible on their part.

Most supplement companies offer no proof their stuff works and if they do, it’s in-house paid research.  If you are paying thousands of dollars for a study to be done, you are sure going to do everything possible to ensure the outcome you desire.

What I found most interesting is on Page 24 of the lawsuit (download the PDF) is that Valerie Bezdek, a purchaser of the FiveFingers shoes was damaged by the untrue deceptive and/or misleading advertising (along with the other class action members).

Yet nowhere in the 28 pages did I find a single mention of such damages.  Nothing, not a single reference or mention anywhere of what might be so damaging other than the premium prices of the shoes.  I can only assume the damages she mentions are for the price of the shoes, around $102.00.

I might ask if Reebok paid $25 million.. where did that money go?

Why Not Use a Mediator?

Why not just ask Vibram to remove the claims immediately and if anybody like Valerie wants a refund, to just ask and she can get 100% of her money back?

Justice Comes at a Price

This is an obvious win for the class action.  You’ve got precedent, a company making health claims that cannot be backed up with valid research and FTC laws for deceptive advertising that are far reaching.  Vibram got big, make some bogus claims (even if their shoes are awesome) and now they are going to pay for it.  To the tune of $5,000,000.  The consumer will be no better off and you might even see a slight price increase to off-set the cost of the lawsuit.  Again, the winners are the lawyers.  Mediation would have been the better option but it’s certainly not more lucrative is it?

Where was the SEC during the financial crisis?  Did they not market under deceptive advertising?  Can I not sue them?

I’m in favor of a regulatory body to ensure that consumers are protected.  However, the FDA, FTC and the SEC to name a few, are simply not up the task.  Too many things slip by, fly under the radar or don’t offer up enough financial reward to be worth the time and effort even though it would service justice.

P.S. - My friend John Sifferman, CST, CST-KS, NSCA-CPT and Barefoot Runner since 2009 wrote The Definitive Guide For Going Barefoot and Learn the Skill of Barefoot Running.

2 Responses to "The Great Vibram FiveFingers Hoax: Justice for a Price?"